We all have both valuable and vulnerable data on our mobile devices: bank account info, credit card number, personal contacts from the phone book and so on. That's why having an antivirus app wouldn't hurt anyone. But its absence surely would.

While some may argue that installing an antivirus would be a waste of storage space and all you need to do is not to download software and files from shady web-resources. Sadly, malware evolves, and now it has adopted new tactics of sneaking into your gadget. Fortunately, security apps do not stagnate either, and you have a wide assortment of reliable safety tools to pick from.

We've collected Top 5 Android security apps for you, so your important information and privacy would be reliably guarded. 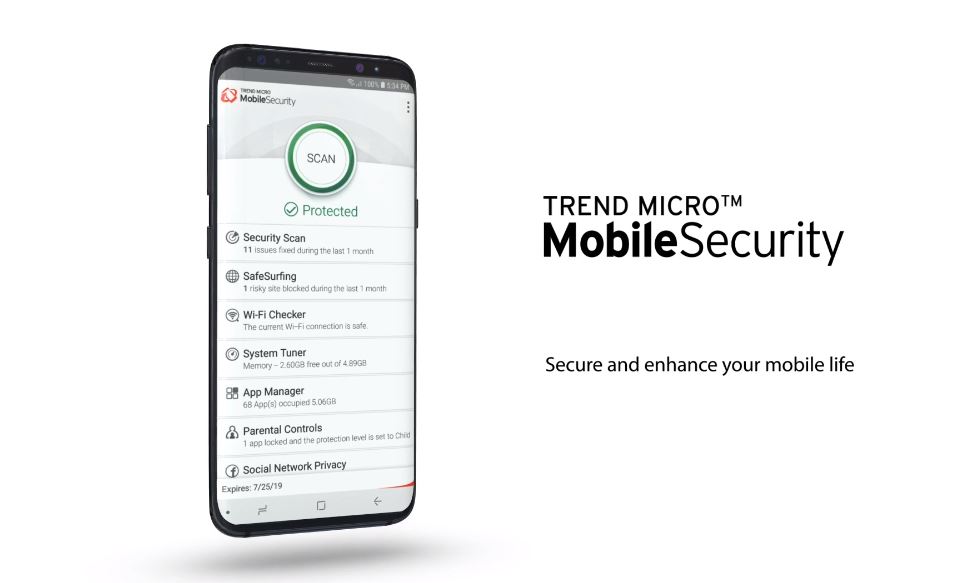 Trend Micro never fails to show impressive results at detecting mobile malware. According to some field testing, it's incessantly close to 100%. For fending off 2,842 malware threats, Trend Micro was awarded with AV-TEST’s Certification Award in 2018. Moreover, this antivirus treats the battery and memory of your gadget gently.

The free version of Trend Micro provides you with:

●  Just-a-Phone feature that shuts down all other unimportant processes on your smartphone.

The premium version can boast of:

You may try the premium version for free for a whole week. 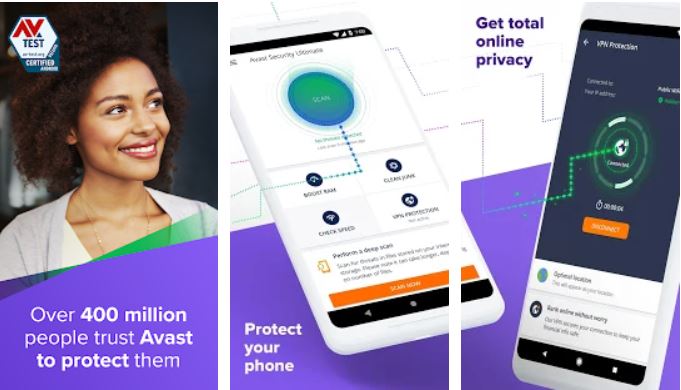 Although a free application, Avast Mobile Security can brag of some remarkable functionality.

●  Application scanner, which can provide a thorough report on any given app.

●  Web-Guard that checks URLs for a possible threat.

●  A blacklist for unwanted callers.

●  App-locker that keeps a private application safe with a PIN-code.

●  Wi-Fi scanner that excludes any probable threats and even optimizes the connection speed.

Anti-theft feature is accessible only to the premium subscribers. As a tasty bonus, they also are liberated from the ads and can get instant tech-support via the application.
An extra feature has been designed specifically for the rooted gadgets - the Firewall. It enables you to control the traffic and therefore prevent certain apps form connecting to the network/Wi-Fi. Such a measure may prolong the battery life and even boost the performance speed of your gizmo.

It's been empirically figured out by the AV-Test that Avast is pretty efficient at detecting malware - 99.9%. Its successful malware detection rate and an impressive list of features make Avast a solid security product and a force to be reckoned with for all the malicious software developers. Besides, it hasn't been noticed that Avast slows the performance of a mobile device down.

The free Avast Mobile Security has a board assortment of protection tools and does a pretty impressive job in general. If you mostly care about risk-free Internet surfing from your mobile gadget  - this app is clearly your go-to. 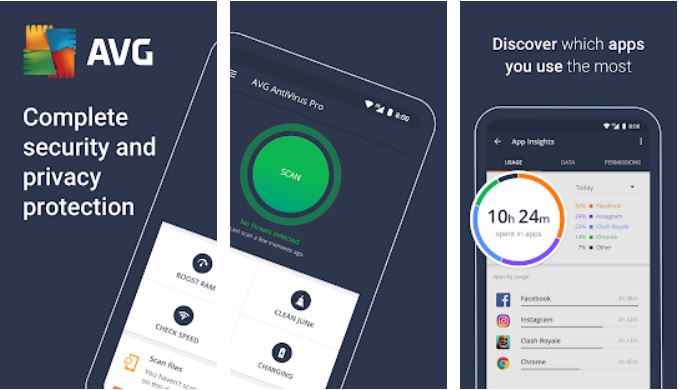 AVG is one of the most recognizable security brands in the world.

It deserves its place in the Top 5 list thanks to:

●  Its ability not to drain the battery much or to hinder the general performance of a mobile device.

The premium version has an intricate feature titled "Camera Trap." It snaps a photo whenever anyone tries to gain access to your phone in your absence, thus presenting you the image of a "perpetrator."

All in all, AVG does quite a decent job of guarding both your data and device, but its constant pop-up ads may cause a lot of annoyance. 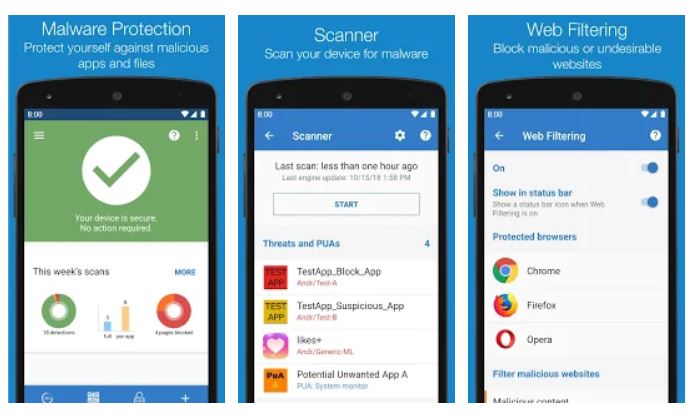 Sophos Mobile Security used to be an absolute champion among the anti-malware apps. It had a bedazzling abundance of useful features, 100% successful detection rate and a zero price.

Unfortunately, Sophos has lost a portion of its excellence, and the detection rate noticeably decreased. AV-Test found out that sometimes Sophos causes a false alarm, mistaking a reliable app for some malware.  Although some believe that Sophos does everything right, since certain legit apps - Facebook Messenger for example - may have been intruding into the user's privacy.

However, its functionality is still awesome, and we have here:

●  A comprehensive scanner - from media files to installed apps.

Occasionally Sophos Mobile Security may stir commotion for nothing, its interface is raw, harsh and austere, but it's still worthy of your attention due to its broad feature list and its free of charge status. It has no ads either. 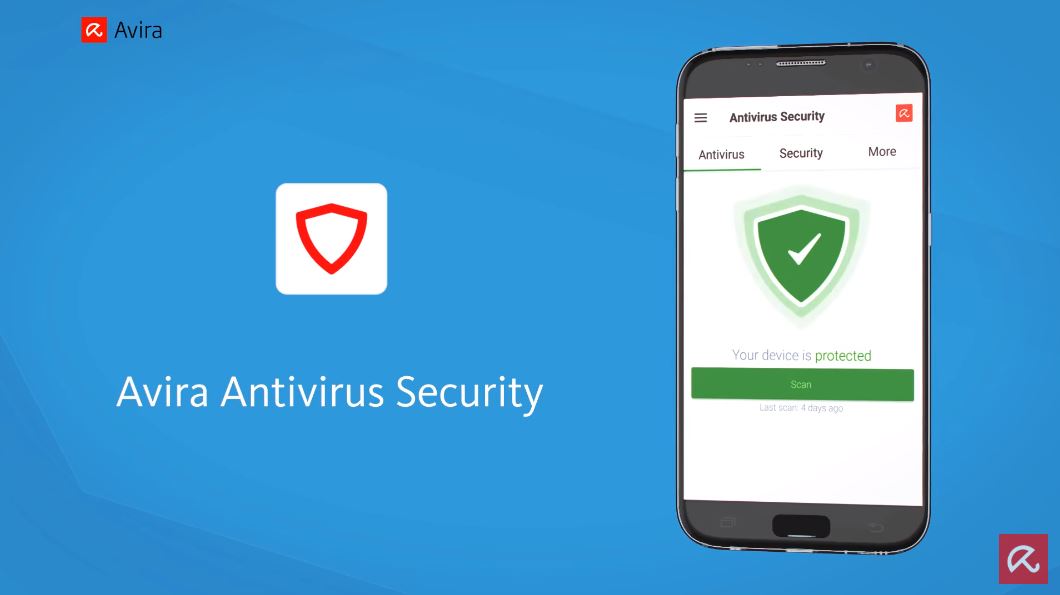 Avira Antivirus Security is one of the most solid protection tools on the Android market. It comes in two versions: premium and free. Although its premium version has a noteworthy array of features, it's guaranteed that the free version of Avira will last you for a long time.

Its successful detection rate is 99.9%, according to AV-Test and the alarm bell was rung falsely only once (so far).

Doubtlessly, Avira will do a decent job, guarding you Android gizmo. And its intuitive and simple interface design is definitely a plus. It does all the necessary work to detect/remove malicious software, offering you a bunch of extra options: anti-theft and recovery utilities to name a few.

The winter and spring antivirus field testing conducted by AV-Test in 2018 showed that only 40% of all security apps provide 100% real-time detection rate. And the false alarm rate, when an antivirus mistakes a reliable app for malware, is steadily growing.

Of course, such big-time brands as Kaspersky or Comodo Antivirus are still very popular, due to being well-known among the users. But some of the free software we've mentioned is actually able to compete with the pricy analogs. You should be warned, that a common strategy for the antivirus brands consists of two steps:

1) To let you have a taste of it during the free trial.
2) Scare you into buying the product afterward.

Keep that in mind, before making a final decision about which antivirus app to install.

In conclusion, if you need to protect your gadget as soon as possible then choose one form these two products. Both of them offer:

●  A wide repertoire of useful features, without unnecessary additions.

In case you're not a fan of either, AVG might lend you some good service.